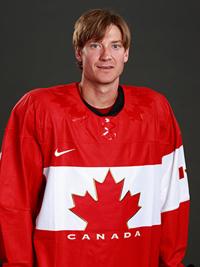 He and his wife Devon have one daughter, Linna  … Favourite player growing up was Steve Yzerman … Likes to golf and mountain bike in the off-season … Son of Dan and Gena … Has one sister, Jill … His father, Dan, played hockey with the University of Alberta Golden Bears from 1968-72 … Supports the H.E.R.O.S. (Hockey Education Reaching Out Society) program, donating tickets to program participants and visiting program events