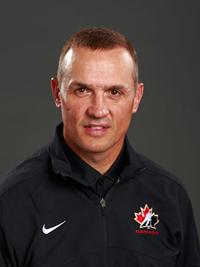 He and his wife Lisa have three daughters: Isabella, Maria and Sophia … Favourite hobbies: golf, boating … Wore No. 19 because his idol was Bryan Trottier … Born on May 9, 1965 in Cranbrook, B.C. but raised in Nepean, Ont. where a rink at the Nepean Sportsplex is named in his honour