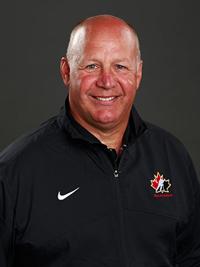 Has been the head coach of the Boston Bruins for six seasons, leading the team to a Stanley Cup in 2011 and into the Stanley Cup finals in 2013 … Has led Boston to three division titles in the past five seasons … Won the Jack Adams Trophy as the NHL Coach of the Year in 2008-09 after guiding the team to 53 wins and 116 points, also earning NHL Coach of the Year honours from The Sporting News … Also served as a head coach with the NHL’s Montreal Canadiens and New Jersey Devils … Coached Montreal from 2003-2006, and New Jersey in 2006-07 … He became head coach of the Montreal Canadiens on Jan. 17, 2003, while in his third season with the Hamilton Bulldogs of the AHL, where his team had a league-leading record of 33-6-3-3 … In the AHL, he amassed a record of 98-88-19 (.524) … After missing the Calder Cup Playoffs in 2000-01, he guided Hamilton to the seventh game of the Eastern Conference Final in 2002 … Shared the AHL’s Coach of the Year honours with current Boston coach Geoff Ward in 2002-03, after Ward succeeding him behind the Hamilton bench after Julien was promoted to the NHL … Prior to taking the job in Hamilton in April of 2000, he spent four seasons as head coach with the Hull Olympiques of the Quebec Major Junior Hockey League where he led the Olympiques to a Memorial Cup victory in 1997 and to the 2000 QMJHL finals … As a professional player, he spent eight seasons playing in the American Hockey League, totaling 246 points in 469 games … In the 1988-89 season, he was named as a defenceman on the AHL Second Team All-star … Played 14 total games in the NHL for both the Quebec Nordiques and the St. Louis Blues.

He and his wife Karen have a daughter, Katryna Chanel and a son, Zachary … Born on April 23, 1960 in Blind River, Ont. … Bilingual, speaks English and French