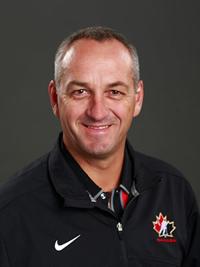 Has been a member of the Montreal Canadiens’ Communications Department for 17 years, 11 as Director of Media Relations … He is responsible for all aspects of the club’s media relations on a daily basis … Began his career with the Ottawa Senators when the team entered the NHL in 1992, before joining Montreal in August 1996 … Was recruited by the National Hockey League Public Relations Department on three occasions, including the 1996 Stanley Cup Finals … In the summer of 2005, he worked at the FINA World Aquatic Games, held in Montreal, as Director of the Press Centre … Over the past two years (2011 and 2012), he is one of the franchise’s representative in Le Grand Défi Pierre Lavoie, a 1,000 km cycling marathon to promote healthy life habits among young people and support hereditary orphan disease research through the GO Foundation’s scholarships and grants … A native of Montmorency, Que., he earned a Bachelor of Communications degree from the University of Ottawa in 1990.