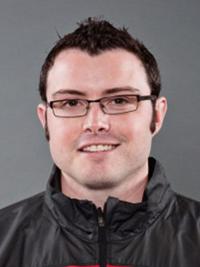 In his second season working with Canada’s National Sledge Team … Won a gold medal with Canada at the 2013 IPC Sledge Hockey World Championship in Goyang, Korea … Won a gold medal with Canada’s National Men’s Summer Under-18 Team at the 2011 Memorial of Ivan Hlinka tournament in the Czech Republic and Slovakia … Worked as a goaltender consultant with Canada’s Program of Excellence goaltender camps in 2011 and 2012 … Has been the goaltender/video coach of the Cape Breton Screaming Eagles (QMJHL) since 2008 … As a player, won the Royal Bank Cup, Canada’s National Junior A Championship, with Halifax in 2002 … Played for Cape Breton (QMJHL) in 2000-01 … Lives in Sydney, N.S., with his wife and son