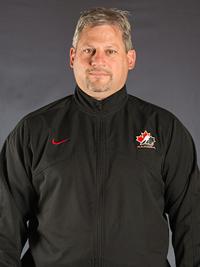 Has spent two separate stints as head coach of the WHL’s Regina Pats, 2004-08 and 2009-11 … Spent one season with the Ottawa Senators organization in 2008-09, starting the season as an assistant coach in the NHL and completed the season as head coach of the AHL’s Binghamton Senators … Was head coach of the WHL’s Moose Jaw Warriors from 2002-04 … Was an assistant coach with the IHL’s Grand Rapids Griffins in 1998-99 … Played nine professional seasons, splitting time between the AHL and IHL … Was selected by the Vancouver Canucks in the ninth round of the 1985 NHL Entry Draft … Played three seasons in the WHL with the Prince Albert Raiders from 1984-87, winning the Memorial Cup in 1985

Born in North Battleford, Sask. … Lives in Regina, Sask., with his wife Kim and two sons