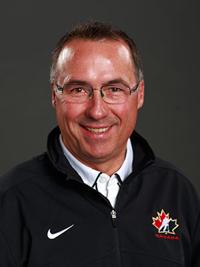 Has been involved in sports medicine for 20 years and covered international hockey since 1995 … Has been Team Canada’s team doctor for seven IIHF World Championships, including two gold medal twice (1997, 2003) and one silver medal (2005) … Won a gold medal with Canada’s National Junior Team at the 1997 IIHF World Junior Championship … Was team doctor for Canada’s gold medal- winning Men’s Olympic Team at the 2010 Olympic Winter Gamees in Vancouver and the 2002 Olympic Winter Games in Salt Lake City, Utah and with Canada’s championship team at the 2004 World Cup of Hockey … He has covered numerous other international tournaments, including nine Spengler Cups, four Sweden Games, four Deutschland Cups, two Izvestia Cups and the Loto Cup … Has also been part of the medical staff for the Calgary Stampeders Football Club (CFL, Grey Cup champions in 1998 and 2001) since 1998, the Calgary Hitmen Ice Hockey Club (WHL) from 1995-2001 and the Calgary Cannons Baseball Club (PCL-AAA) from 1991-2003 … Was born and raised in Calgary, Alta., where he still resides … He and his wife, Kari, have one daughter, Stina